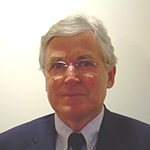 He graduated from the University of Otago,Dunedin ,New Zealand with BPharm.,MPharm (Hons) and PhD degrees in pharmaceutical chemistry and pharmacology. He completed a postdoctoral fellowship in Pharmacology and Experimental Therapeutics at the Johns Hopkins University School of Medicine in , and subsequently held a joint appointment in neurosciences at and the Squibb Institute of Medical research in . In 1975 he joined Roche to establish a pharmacology research and clinical pharmacology program in , and later was appointed Medical Director then Managing Director for Roche in . In 1990, after completing a business management program at IMD,Lausanne,Switzerland he was appointed Managing Director of  Roche United Kindom based in Welwyn Garden City,Herts. .Following the Roche aquistion of Syntex in 1994 he was appointed President, Syntex , to convert the corporate pharmaceutical company to Roche Bioscience, a research center. He later returned to to manage the Roche affiliate and also to help Roche find research alliances in the Asia Pacific area. Dr Taylor is a consultant to the University of Auckland commercialization company Uniservices.