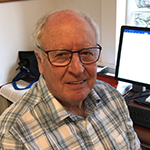 Emeritus Professor Dick Bellamy is a virologist and molecular cell biologist whose research career centred the general area of the molecular biology of virus infection and the application of recombinant methods to the characterisation of viral gene products.  Much of this work involved a network of collaborators in Australia and the USA and was supported by the NZ Health Research Council.  Dick is a Fellow of the Academy of the Royal Society of New Zealand.

Dick retired from the University of Auckland after serving as founding Director of the School of Biological Sciences and as Dean of Science. Currently he Chairs the University Animal Ethics Committee and serves on two Return on Science Investment Committees.

Outside his various University involvements, Dick has been a former Director of Auckland Uniservices Ltd and of its subsidiary DNA Diagnostics Ltd, (which he helped found), a former Director of the Forest Research Institute (now Scion), Auckland Regional Councillor and President of the Auckland Museum Council.